She paces around Tara at fixed times, cameras slung over her shoulder, to carry out a project called « The Colour of the Ocean ».

« The Colour of the Ocean » 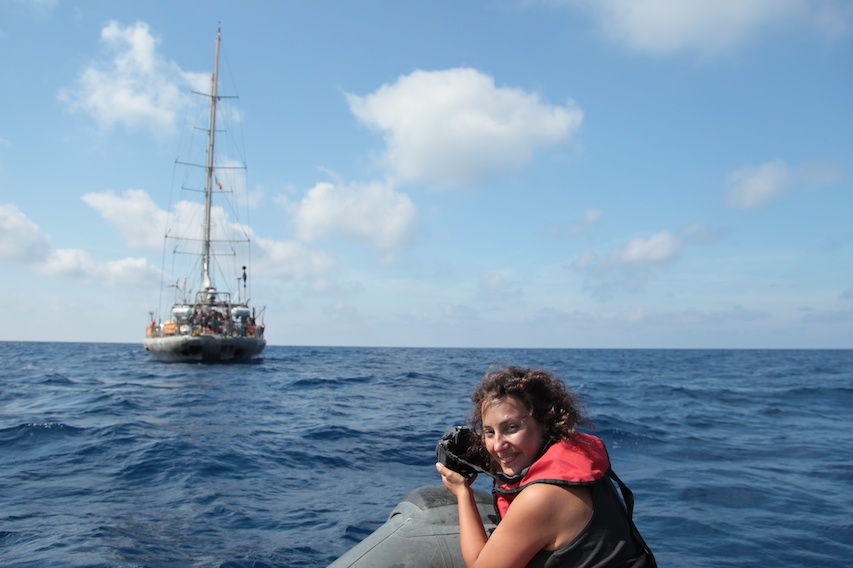 Lola Reboud was born in 1982 in Marseille. She studied at the Beaux Arts de Paris Cergy, and then at the National School of Decorative Arts in Paris. She currently lives in Paris.

The encounter between an individual in relation to the place where she lives and  her relationship to the climate are the starting points of Lola’s work. By mixing  photographic wandering with a concern for documentary precision, at the edge of  current events, she tells stories where geography is as important as the subject.  The common thread is the relationship we maintain with the climate.

Her recent projects initiate conversations between geographers and designers.  These collaborations are put into form in different media: textiles, wallpaper, posters  and projections. In exhibition spaces, they take the form of in situ installations. As a  photographer, she paces the boat at fixed times— from Bizerte (Tunisia) to  Marseille (France)— cameras slung over her shoulder, to carry out a project called  “The Colour of the Ocean”.

and recently at the CCO Art Center— Osaka. In 2013 she was awarded the  C.N.A.P. documentary photography grant for Climates II, a project currently being  realized in Japan.

Discover some of her creations inspired by life aboard Tara :