Placing the ocean at the centre of international negotiations

An ocean in good health, a major challenge for the future of humanity

The preservation of the ocean and its living resources is now a major challenge for the planet. This shared resource and the ecosystemic services that it provides to humanity (climate regulation, oxygen production, food security, etc.) require rapid and coordinated climate actions on the part of states. The setting up of adequate international legal frameworks to ensure the protection and sustainable exploitation of the ocean is also a priority. The place of civil society is crucial in taking up these challenges in international bodies and negotiations on the climate, biodiversity, the high sea and plastic pollution.

The objective of the Tara Ocean Foundation is to make high level scientific expertise available to clarify environmental policies. In the various international bodies and negotiations, we emphasise the importance of understanding marine ecosystems for their preservation, sustainable management and climate regulation. Since 2015, thanks to its status as Special UN Observer, the foundation has been supporting the important decisions to be taken in favour of the ocean in the eyes of leaders and encouraging them to maintain ambitious objectives.

Integrating a systemic vision into the International Treaty against Plastic Pollution

Since 2015, thanks to its status as Special UN Observer, the foundation has been supporting the important decisions to be taken in favour of the ocean in the eyes of leaders and encouraging them to maintain ambitious objectives on the climate, biodiversity, the high sea and the fight against plastic pollutions.

Although it is a key part in the planetary climate machine, the ocean has long been absent from discussions on climate change, historically “green” and linked more to the preservation of tropical forests. Including the ocean among the challenges and issues discussed during negotiations is now a real necessity. The foundation is more than ever involved in raising awareness and drawing the attention of decision makers to climate change. With the Because the Ocean initiative, launched in 2015 at COP21, we are particularly encouraging states to include the ocean in the context of their concrete actions on a national level.

The protection of marine biodiversity has historically been developed to protect the big iconic species, like the whale, sharks and red tuna.

Today, we know that we must also care for the ocean microbiome, the invisible creatures which provide the basic ecosystemic services derived from the ocean.We are working to make the concept of the microbiome, largely unknown by negotiators, more visible in the context of the protection of marine biodiversity, like the definition of Protected Marines Areas or the prediction of the impacts of climate change on fishing stocks.

Lastly, with the Tara Pacific scientific programme, we are guiding decision makers with more comprehensive and innovative information on the state of health of coral reefs.

Since its first expeditions, the schooner Tara and its researchers have been interested in plastic pollution, its distribution, its abundance and its impact on marine biodiversity. From the Mediterranean Sea to the Antarctic and the Pacific islands, the observation is the same: plastic is omnipresent and is now an integral part of marine ecosystems.

To address this issue on a global scale, 175 States approved a resolution at the  March 2022 United Nations Environment Assembly to develop a legally binding international agreement by 2024.

The resolution addresses the entire life cycle of plastics, including their production, use and disposal. As a Special Observer at the UN, the Tara Ocean Foundation is following the negotiations to ensure that the issue is addressed at its source and not in a symptomatic way, focusing only on the management of the waste generated. 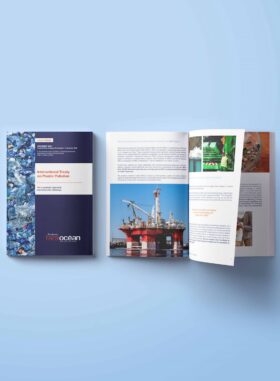 The schooner Tara unceasingly sails the high sea during its missions. The science produced on board to assist understanding of this little studied area has been pioneering and is now internationally recognised. Far from coasts and national territories, the high sea is still a lawless area for marine biodiversity.

To fill this legal void, the UN has been initiating negotiations since 2012 to establish the very first treaty that would enable the protection and management of two thirds of the ocean: huge scientific, economic and environmental protection challenges for the international community!

Thanks to its status as UN special observer, the foundation has been supporting negotiations in New York since 2012. Alongside scientists, the Tara negotiating team produces documents passed on to the countries’ delegations, and organises fringe conferences during the sessions where scientists and political decision makers can discuss the future treaty.

All the news of our political action

What progress has been made following the United Nations Conference on the Ocean in Lisbon?

What action do we take to find global solutions?

With whom do we share our commitment to the ocean?